Why the Persian Gulf ?

Thank you for your interest to know more about Qeshm Environmental Conservation Institute (QECI), and about the motives that make us chose to dedicate much of our life to protect the biodiversity of the Persian Gulf. 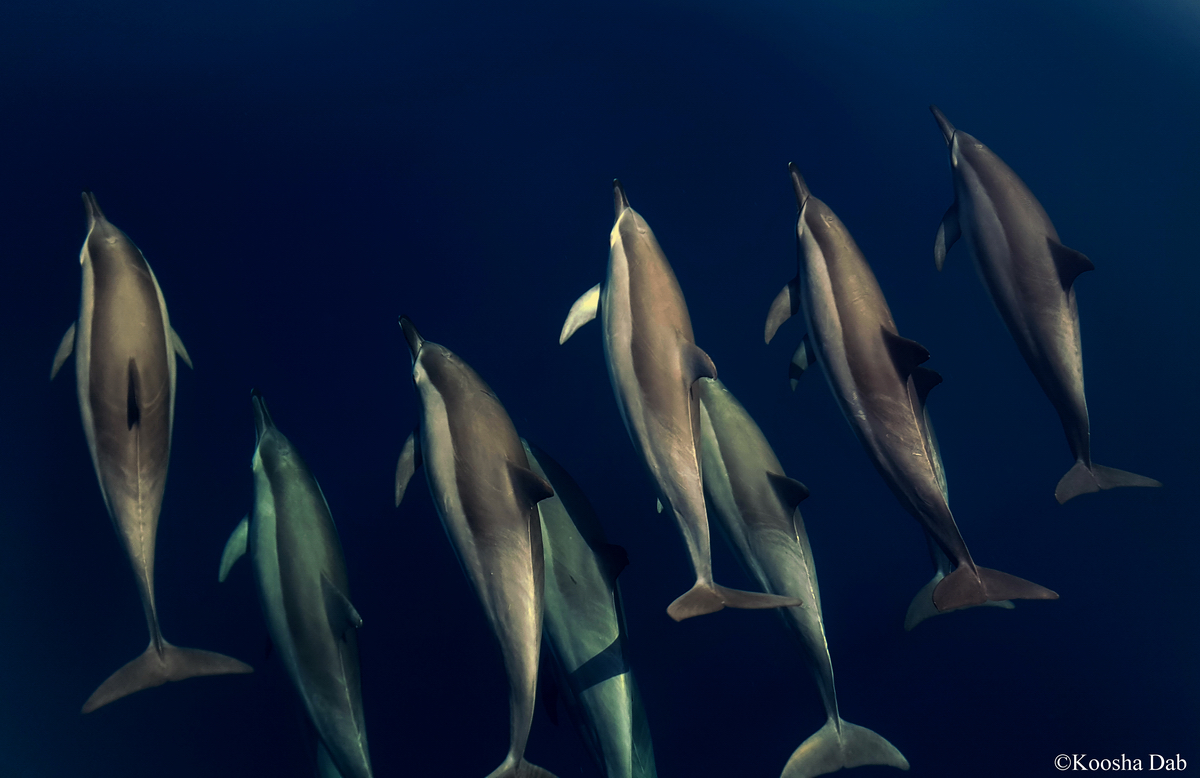 Humans daily pass more than 20 million oil-barrels through the Strait of Hormuz, which provide about one fifth of the petroleum that our oil-addicted civilization consumes. The most stunning wonder of this 33 km-wide strait, however, is its unique underwater life, like these graceful pantropical spinner dolphins (Stenella longirostris) joyfully swimming in this narrow waterway.

To remind ourselves the importance of our mission, here in QECI we usually review the history and origin of this young sea on our planet. Just imagine, the first people that explored the Persian Gulf more than 15.000 years ago or so at the late Pleistocene, instead of a shallow sea, they found a fertile plain with  several rivers passing through like the Tigris, Euphrates and Karunand streaming  into the Indian Ocean. The treasure that those prehistoric men found there was freshwater resources that could save them during the droughts of the last ice age (ref). Although after the ice age, with rising sea levels, the Indian Ocean flooded that vast plain and forced its residents to leave. However natural resources of that newborn sea was a newfound treasure that convinced human societies to build their civilizations along its coasts (ref). One of the most precious of those natural treasures was the Persian Gulf pearl which in the Gilgamesh Epic, one of the oldest literary works ever discovered, has been speculated as the “Flower of Immortality”. In some other historical texts, it was also mentioned as the most expensive gem in the ancient Roman Society (ref). Eventually, at the end of the second millennium, huge hydrocarbon resources were another wealth that humans found under the Persian Gulf. Along with other hydrocarbon resources of the world, the gulf’s oil and gas resources have gone on to facilitate humans to build a consumerist civilization addicted to cheap energy, eventually contributing to man-made climate change.

A coral reef community near Greater Tomb Island at the eastern Persian Gulf. Coral reefs of the Persian Gulf are a good example of the heat-tolerant marine biota living in this climate changed marine realm. Increasing water temperatures for just one to two degrees may cause reef corals to turn white, a phenomenon named “coral bleaching” which can kill the corals if it lasts for a prolonged period. It happens because thermal changes lead corals to expel the symbiotic algae living in their cells. The algae not only are responsible for the corals’ colour, but also provide up to 90% of their energy through photosynthesis. Surprisingly, the Persian Gulf reef corals resist the temperatures that cause coral bleaching elsewhere in the world. However, even these heat-tolerant corals are not able to adapt to the current rate of the man-made global warming. Sheppard (2016) reported that about 70% of the Persian Gulf’s coral reefs disappeared in just a few decades, and sadly, all scientific evidence shows that this decreasing trend continues. But can we do anything to save this natural heritage? (Read more)

Nevertheless, we at QECI believe that neither prehistoric humans nor pearl-divers nor oil-explorers could find the real treasures of the Persian Gulf. It was marine biologists who discovered that:  the Persian Gulf’s stunning heat-tolerant biodiversity! The Gulf is known as the warmest sea on our planet, where sea surface temperatures can exceed 36 degrees Celsius during the summer (ref). Over millennia, the biodiversity of the Gulf has evolved to adapt to the extreme temperatures. As a result, much as a living laboratory, the sea can help us to understand how man-made global warming might affect marine biodiversity elsewhere in the world, a resource which three billion people, one third of the world’s total population, depend on for their livelihoods (ref). 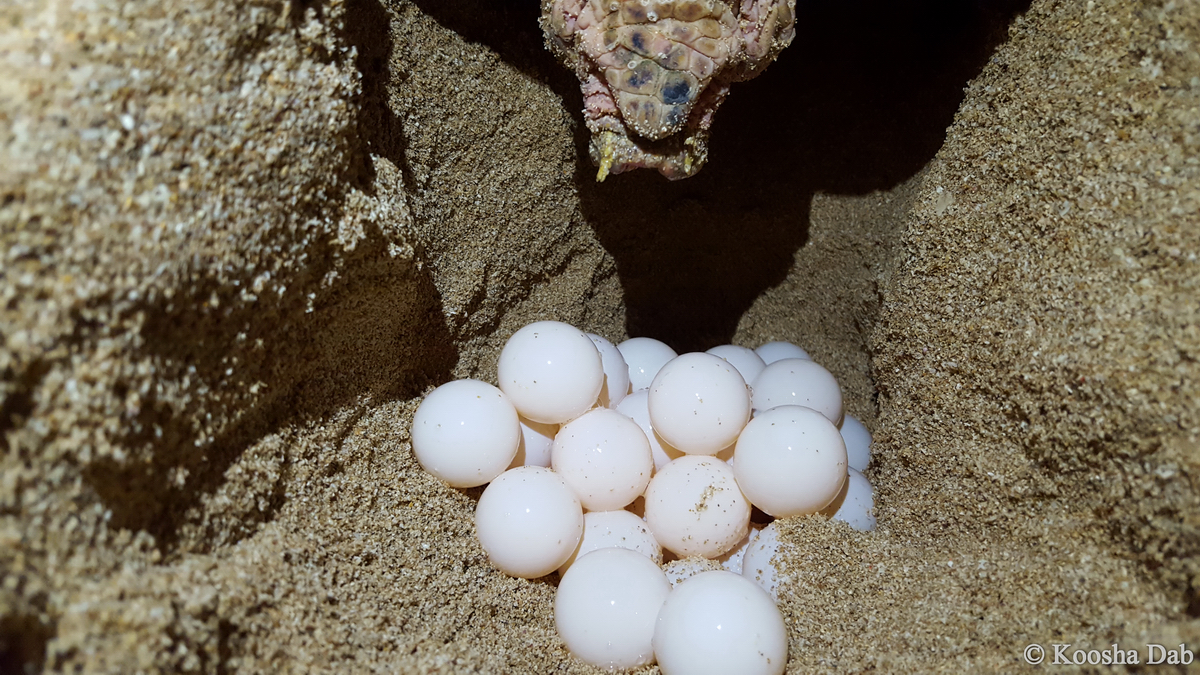 A hawksbill turtle putting her eggs below the sand of Shibderaz beach at the southern coast of Qeshm Island. Sea turtles nesting on the shores of the Persian Gulf are another good example of heat-tolerant biota living in the sea. Sea turtles’ sexual phenotype is determined by the incubation temperature during embryotic development. Increasing temperatures of the nesting beach sand produces more females, whereas decreasing the temperatures produces more males. Due to the fact that increasing the temperatures for just few degrees can produce 100% females, it has been suggested that climate change can lead to skewed sex-ratios among sea turtles, which may push their populations to collapse. Actually, recent research showed that this prediction has already happened in one large population of green turtles at one Australian nesting site that has produced 99% female hatchlings for more than two decades (ref). However, both hawksbill and green turtles have continued to reproduce along the shores of the Persian Gulf for many generations, and the high temperatures of the region do not seem to have produced unsustainable skewed sex-ratios for them. Therefore, sea turtles of the Persian Gulf appear to be able to cope with changing climate over evolutionary timescales.  However, it is not clear whether they can also tolerate the current man-made global warming, or not.

However, sadly, in our modern world the Persian Gulf is more famous for huge hydrocarbon resources rather than its unique marine environment. Because of several disasters that the sea experienced during the last decades, including three wars and the world largest oil spills , and also because of the contemporary massive coastal development and the overexploitation of its resources, the natural environment of this young sea is now pushed into its last stronghold (ref).

Although the Persian Gulf’s natural realm is now more vulnerable than any other time in history, it is still not too late to make a difference for the future of this unique marine environment. Strong will and serious cooperation between local communities, environmental NGOs, governmental agencies, policy makers and academia can ensure a positive future for this unique environment. “Sustaining biodiversity in the Persian Gulf”, is exactly the “treasure” that we in QECI are seeking, through conducting research, developing science-based solutions, and education and raising awareness, and taking direct conservation actions, as much as we can. Certainly, we cannot succeed in this endeavor alone. Therefore, our main contacts and supporters are people, and specifically, local communities. Because we believe that “biodiversity conservation” without the full participation by the people who live in the critical habitats of this planet is just an illusion. After that, we greatly hope for the involvement of the academia, governmental agencies, national and international NGOs and environmental charities to help us to keep moving forward toward our mission.

We, at QECI, very much hope that in cooperation with all of you, we could take a step towards the effective, long-term protection of this valuable but forgotten treasure, and pass it on, safely and intactly, to future generations. Our oceans are a treasure for everyone who lives on this changing planet. Let our children inherit this treasure from us, in a healthy form.

Founder and general director of QECI