Five of the seven living sea turtle species have been seen in the Persian Gulf:

Green turtles (Chelonia mydas): Foraging green turtles of all ages are widespread throughout the Persian Gulf. The main nesting activity of the species inside the Gulf is attributed to about 1000 females nesting on Jana and Karan Islands of Saudi Arabia. Apart from these two Saudi islands, other green turtle nesting activities inside the Persian Gulf include a handful of individuals nesting annually on Qaruh Island of Kuwait, and less than 10 others nesting annually on Kharko Island of Iran. Infrequent nesting attempts of the species have also been recorded on Iranian and Emirati islands. The largest green turtle nesting site in the area reported from adjacent waters of the Persian Gulf, annually around 7,000 females nest at the Omani beaches of Ras Al Hadd and Ras Al Jinz, southeastern Gulf of Oman. Despite the sporadic nesting sites, green turtles are well known for feeding on seagrass and seaweed meadows within the Persian Gulf. 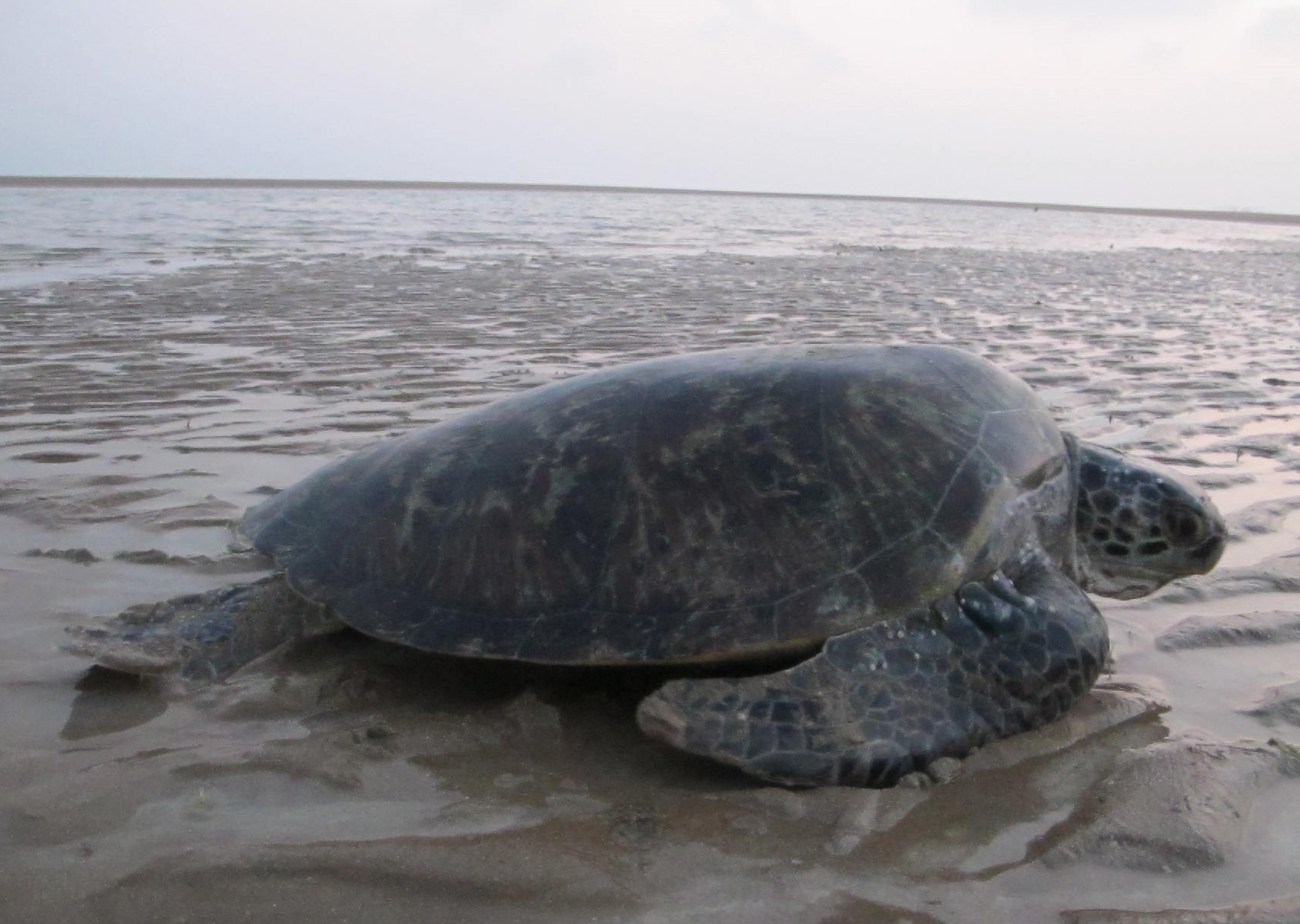 Hawksbill turtles (Eretmochelys imbricata): The species is the second dominant sea turtle species in the Persian Gulf. Foraging hawksbill turtles mostly distributed in the southern and western halves of the Gulf in Qatari, Saudi and UAE waters, whereas nesting sites of this critically endangered species can be found throughout the sea.  It is thought that the nesting hawksbill population of the Persian Gulf is probably the most important one in the Indian Ocean. 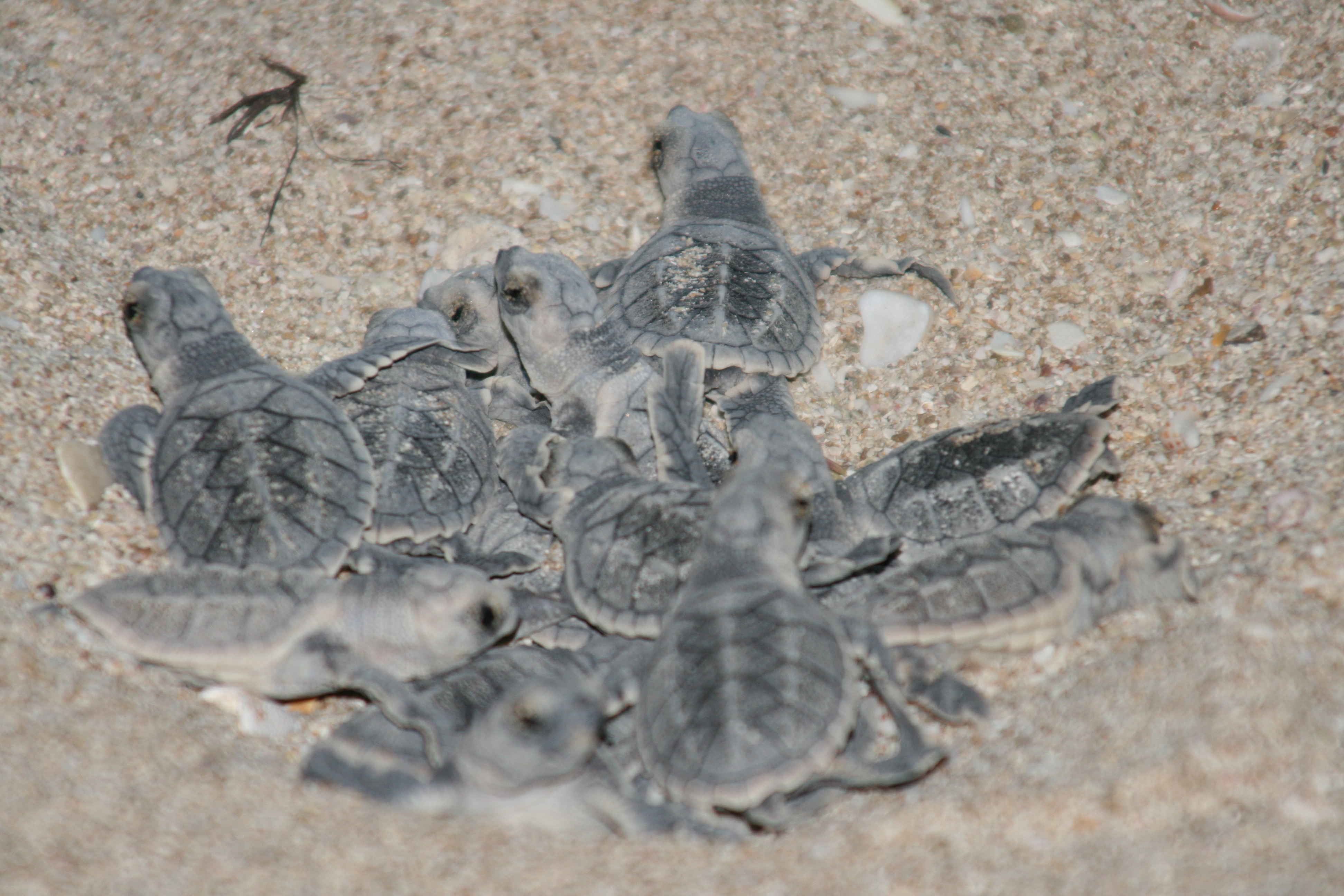 Olive ridley turtles (Lepidochelys olivacea): Although few in number, olive ridley sea turtles live in the Persian Gulf. There are several records of sub/adult olive ridley turtles along both Iranian and Arabian sides of the Persian Gulf, which washed ashore as dead animals or were incidentally bycaught. Nonetheless, except a sole nesting recorded from Nayband Marine National Park on Iranian coastline of the Persian Gulf, no record is available for nesting of the species in the area. However, relatively small occurrences of non-arribada nesting sites found on the shores of Pakistan and Oman’s Masirah Island in the Arabian Sea.

Loggerhead turtles (Caretta caretta): Similarly to olive ridley turtles, loggerheads have low abundance within the Persian Gulf, and available records consist of bycaught animals and dead specimens washed ashore, especially along Iranian coasts.However, there are large, globally important nesting sites of the species along the shores of the Arabian Sea. An assessment in 2015 showed that northwestern Indian Ocean loggerhead sub-population is classified as critically endangered. It is estimated that just over a period of two decades, approximately 30,000 loggerheads nesting in Masirah Island declined to around 13,000 individuals. Therefore, developing conservation programs through the habitual range of the species in the northwestern Indian Ocean, including the Persian Gulf, is essential to protect this critically endangered sub-population from the risk of extinction.

Leatherback turtles (Dermochelys coriacea): This species is very scarce in the study area with just a few records available from both the Persian Gulf and the adjacent Gulf of Oman. It seems likely that leatherback turtles are vagrant in the area.

Our conservation works for sea turtles in the Persian Gulf: