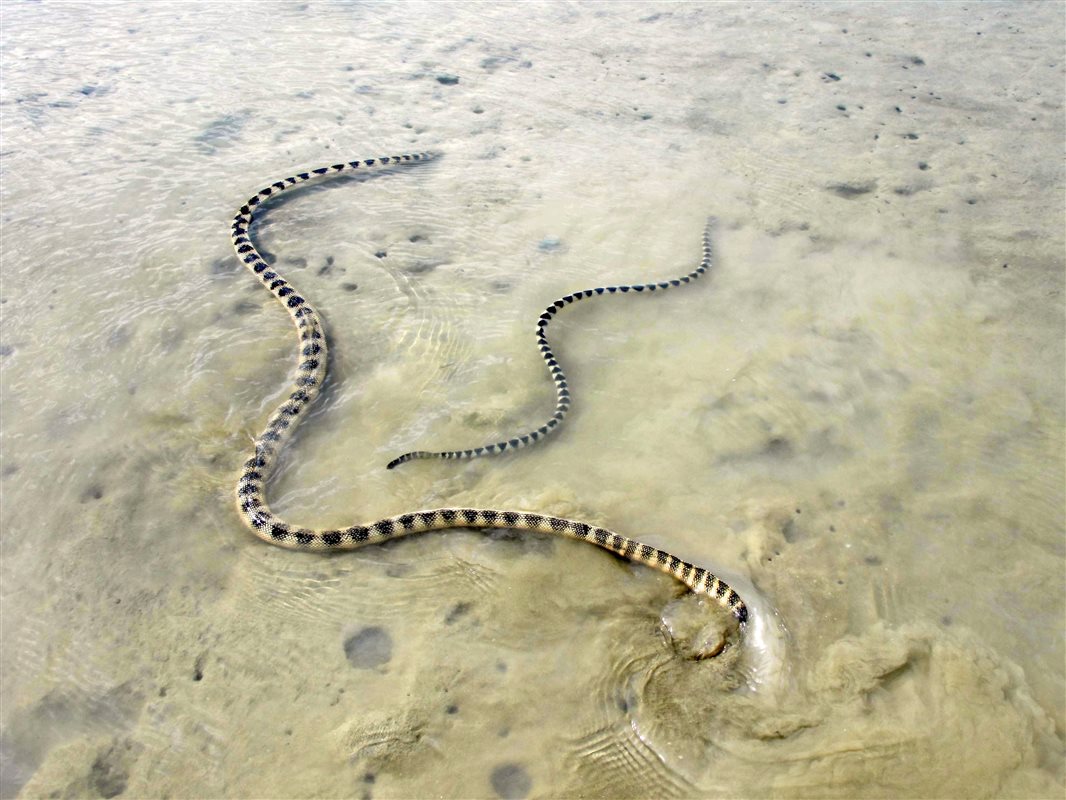 Ecology and conservation of sea snakes

The Persian Gulf is home of 10 species of sea snakes (about 15% of all described species). This semi-enclosed body of water is also known as the westernmost distribution extent of these marine reptiles. However, by the beginning of 2010s, our knowledge about the status of sea snakes in the Persian Gulf and  adjacent waters were limited to some old data on their diversity and written description on their morphology. Furthermore, no attempt had been made regarding conservation of these highly venomous snakes in the area.

Therefore, in 2014, thanks to a grant from UNDP/GEF/SGP, comprehensive surveys commenced with an array of field surveys along Iranian coastal waters of the Persian Gulf and Gulf of Oman. We boarded industrial trawling vessels for weeks to collect data from bycaught sea snakes. We patrolled the coast to find stranded sea snakes, particularly during the monsoon season in the Gulf of Oman, and carried out several scuba diving and small boat surveys to study sea snakes in their natural marine habitats. We worked in the lab for several weeks studying approximately 100 specimens (which had been collected dead from trawler bycatch) aiming to build a comprehensive museum collection for future studies. We also held a series of workshops to enhance awareness of local fishers about the importance of protecting sea snakes in marine habitats. We also gave fishers advice on how they can safely release the entangled sea snakes from the fishing nets and what they must to do as emergency first aid in the case of any putative envenomation.

New data gathered in this project helped us to provide an updated and illustrated field guide for sea snakes of the Persian Gulf, which, thanks to financial support of the Muséum national d'histoire naturelle of Paris, was published open access (to have a copy of the guide please click here). We successfully built a museum collection of sea snakes comprising all morphologicalvariations of all 10 sea snake species recorded from Iranian waters, including a specimen of extremely rare importance, which was the first confirmed record of the species through the area (click here to read more). The collection is already preserved in Zoological Museum of Shahid Bahonar, University of Kerman. Regarding sea snake conservation, we engaged with many fishers to ensure they understand the role of sea snakes in the sustainability of marine ecosystems, and that gently releasing an entangled sea snake from a fishing net is safer and more environmental friendly that trying to kill the animal just because it is a venomous snake.